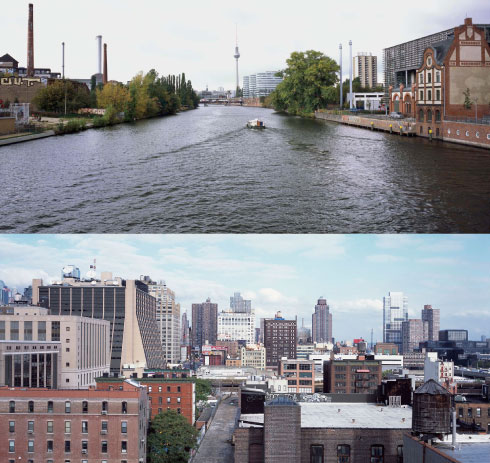 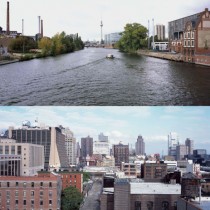 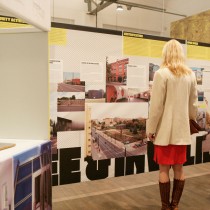 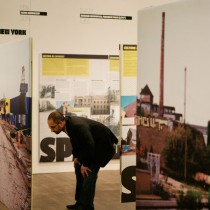 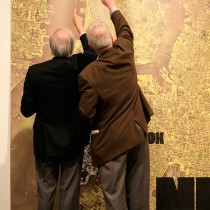 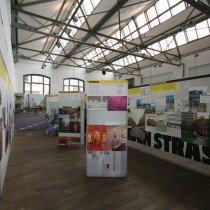 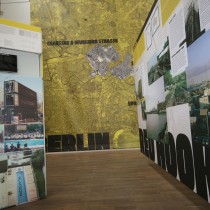 Two of the world’s most dynamic urban centers, Berlin and New York, are making radical transformations in their streets and skylines. Berlin – New York Dialogues investigates the changes in these two cities by looking at the contemporary built environment and mechanisms of urban regeneration – the social, political, economic, and cultural processes that affect building.

As the exhibition delineates, the sustainability of these cities’ urban neighborhoods is increasingly dependent on a critical mixture of identity, urban diversification, and functional infrastructure.

Against a background of urban data Berlin – New York Dialogues brackets three areas of each city. Both high-end projects and informal initiatives are featured, with respect to a set of overriding topics: Culture as Catalyst, Community Activism, Gentrification, Open Space, and Legislative Intervention. Focus is given to the stories and forces behind the projects – the “urban context”.

In Berlin the featured areas are all in the immediate center of the city, where different stages of re-development have been occurring since the city and countries’ reunification in 1990: Mitte – where the radical transformation of the historic city center encompasses far more than just restoration work, The Spree Area on the former border between East and West Berlin where big industries are now claiming the spaces that cultural initiatives and temporary urban party zones have occupied along the river, and Chaussee + Invaliden Strasse – Development is eminent in this area, with the opening of the central train station and the construction of the massive BND (Federal Intelligence Service) complex in progress.

The three areas of New York City, however, stretch from Manhattan into the outer boroughs: Chelsea – where luxurious Manhattan living is developing at an alarming rate alongside new visions for how industrial sites can be transformed into public space, Red Hook in Brooklyn where the introduction of Big Box retail has brought speculation about its future while efforts to maintain the artisan community remain strong, and Hunts Point + Mott Haven in the South Bronx where industrial zones are being reinvented into areas suitable for parks and schools.

Though fundamental differences exist in the way Berlin and New York operate, the hope of the exhibition is not to position one city against the other. It is rather to foster learning among each city’s citizens and support a consciousness of the driving forces behind the architectural realities of these two cities, suggesting that ultimately, things can be different.

In cooperation with: Pratt Graduate Center for Planning and the Environment, Deutsches Haus at NYU, and Akademie der Künste, Berlin

Supported by the Alfred Herrhausen Society

In New York Berlin – New York Dialogues (the exhibition and the symposia) was presented in partnership with Carnegie Hall as part of “Berlin in Lights”, a festival taking place November 2-18, 2007.