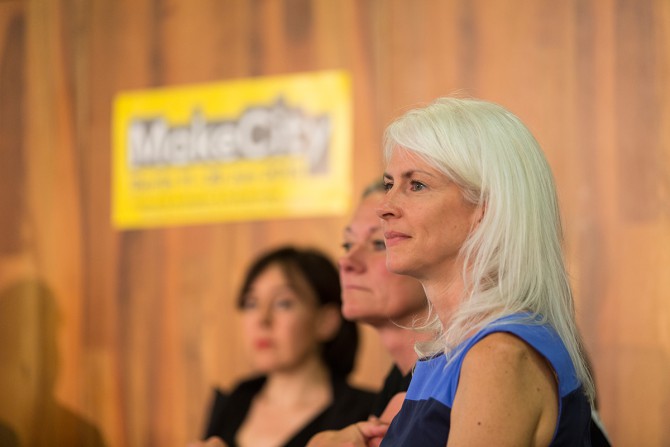 AA PROJECTS was founded by Kristien Ring in 2011. Kristien Ring is known for her work as the founding Director of the German Center for Architecture DAZ, and as an international consultant, curator and author.

Kristien Ring works as a curator, designer, author and architectural critic in communicating architectural topics as well as in teaching. Author of “SELFMADE CITY. Berlin, Self-initiated Urban Living and Architectural Interventions” (2013, Jovis) and “Urban Living, Strategies for the Future”, (2015, Jovis). Kristien is currently Asst. Professor at the University of South Florida. Kristien is American, living in Berlin since 1991 and is a registered, German Architect. (Dipl.Ing. Architektin, B.E.D.Arch U.S.A.)

AA TEAM
AA PROJECTS works, depending on the concept and size of the project, together with an individually-picked team of experts. AA PROJECTS Team Members are experts in the areas of Cultural Science, Cultural Management, Communications and PR, Exhibition and Event Management, Exhibition Design, Communication Design, Architecture, Art, Photography, Technical Sepcialists, Web Activists and further partners who work together with us on a project basis.
Team Members are listed under the “credits” of each project.

DIRECTOR – GERMAN ARCHITECTURE CENTER, DAZ (Deutsches Architectur Zentrum)
11.2004 – 03.2011 As the Director of the Greman Center for Architecture (DAZ) Kristien Ring was trusted with the task of developing a new profile and concept for the DAZ, while establishing it as a place for architectural discourse and as an international forum for architecture. Kristien Ring was responsible as a freelance entrepreneur (2004 – 2008) und then as an employee of the Federal Association of German Architects (BDA) (2009 – 2011). Her responsibilities included: The program conception, coordination and presentation of exhibitions with accompanying programs and publications, the definition of a new DAZ profile as well as the building of a new administration and management structure and financing concept. Kristien Ring was also entirely responsible for the funding of the DAZ program through the acquisition of sponsors and third party support, and built co-operations with the industry, foundations and patrons.

SUITCASEARCHITECTURE
06.2001 – 12.2005 Kristien Ring co-founded and ran the gallery SUITCASEARCHITECTURE together with Beate Engelhorn as a forum for architecture and design. With the goal of contributing to a better public awareness for architecture, they presented over 50 exhibitions on current architectural projects and themes. As an independent institution they were responsible for the conception and design of the architectural gallery, the management as well as the communication and PR work for the gallery. www.suitcasearchitecture.com